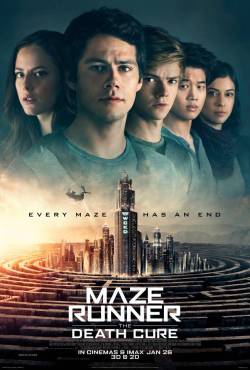 After a lengthy delay due to star Dylan O’Brien suffering a life threatening injury on set, the third and final film based on the young adult trilogy by James Dashner has arrived. You might want to give the last film a refresher watch if the last time you saw it was when it came out over two years ago though as this one hits the ground running and there’s a lot going on with a lot of characters you might not remember. You can’t even rely on knowing the books to help keep things straight – if you remember, by the time the end credits of the previous installment rolled, the film franchise had forged its own distinct path, quite different from the source material.

If you’re a diehard fan of the books, be prepared to continue being disappointed as this film continues in its own direction, only loosely adhering to the original story. At least the films forge their own interesting path with purpose, though, unlike some other franchises.

Nobody is phoning it in here and there is a real earnestness in the story and characters that is often lacking in these sort of franchise adaptations – especially by the time the final installment rolls around. The story goes some interesting, if relatively predictable, places. It sadly doesn’t stay as much of a zombie thriller as the second one surprisingly was, but is still more grounded and real feeling than so many other similar films. Aesthtically it does finally wander into familiar territory by the end as certain scenes feel like they could take place in any number of a dozen futuristic dystopian movies that we’ve seen before, but holds its own enough that I wasn’t rolling my eyes too hard at the Apple Store interiors, holographic billboards, and impossibly pressed outfits of vaguely science fiction origins that we’ve become so accustomed to. Despite familiar textures and tropes, the world of the Maze Runner still feels plausible and lived in instead of just art-boarded and decorated.

Though much of the plot has changed dramatically from the original book, the overall story and characters stay fairly true to themselves even if many details have been altered. And in the end both reader and viewer are left pretty much in the same place, so kudos on that. There are details from the prequel as well as this book that would have made the story more effective, in my opinion. I won’t get into spoiler territory, and it is possible that I could be forgetting things that were revealed previously, but certain things that really shape the entirety of what is going on here seem to be left to our interpretation or completely left out, which is a shame, especially considering how much time is spent on fairly non-essential aspects of the story. A fairly lengthy saga, it could have stood to be trimmed a good half hour, or at least utilized its full runtime much more effectively with world building, character development, and more scenes rather than lingering too long on too little.

Over all it is a satisfactory, if somewhat muted conclusion to a fairly solid trilogy, and worth seeing.