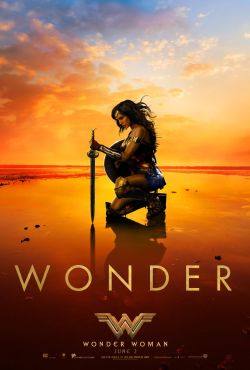 DC has given up.

And by that I mean they have seemingly finally realized that being different from Marvel for the sake of being different from Marvel was a bad strategy. In many ways, Wonder Woman is a reflection of the comic book movie formula that has worked so well for the Avengers et al. There is heart and humor, characters we care about who have interesting things to do and say, and an embrace of the more otherworldly aspects of comic books without bending over so far backwards to keep things gritty and grounded that your spine snaps. They even cast a guy named Chris in a lead role (playing a guy named Steve, no less).

The similarities to the first Avenger don’t end with casting and character namesakes. The obvious gender reversal aside, Wonder Woman is in a lot of ways, the same movie as the first Captain America. Except better. Yeah, I said it. It’s a period piece featuring a strong symbol of truth and right fighting against Germans who are treading on dangerously evil ground. The hero learns a lot about themselves and humanity along the way. Their’s even (minor spoiler) a similar dramatic act of heroism towards the end. There are even more similarities if you take the time to find them, but at the same time, Wonder Woman clearly cleaves its own path. The characters and origins of Steve Rogers and Diana Prince are of course quite different in countless ways, but at the same time are the representations of certain ideals of humanity.

Imbued with a strong sense of “girl power,” the feminism in Wonder Woman shines through organically. It doesn’t feel fake and forced, nor does it feel somehow threatening to masculinity or overbearing. I’m looking at you, Beauty and the Beast, Pirates 5, and any number of other recent flicks trying overly hard to appear timely and relevant. This movie, unlike the rest of the DCEU as of yet, actually has something interesting to say, and takes the time to actually say it in a cohesive manner. Characters are given a sense of urgency and realism that turns even the minor roles into people you have some inkling of care for. Gal Gadot‘s Wonder Woman was easily the best part of Batman V. Superman and she shows here once again how phenomenal she is in the role. Oh, and Chris Pine is pretty good too.

The action is superb and not relentless – spaced out nicely with humor and drama and just enough exposition to keep things flowing nicely. You’ve seen some of what I’m talking about in the trailers, and it only gets better. The villains could have been fleshed out a bit more, but even they are more interesting than the majority of what Marvel has thrown at us in that department.

If this had been the start of the DC cinematic universe people would be awestruck and telling Marvel they’ve met their match. It’s different enough from what Marvel has been doing by virtue of the characters and a certain sense of more seriousness of the world to give people another franchise to care about without feeling like a copycat. If this was the launch of the franchise, I would be salivating at the thought of what was being cooked up down the road. Instead, we’re given something that may have just saved DC’s film series. Only time will tell if the rest of the movies follow this new direction of excellence.

One thought on “Review: Wonder Woman”