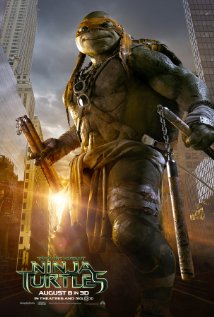 The classic heroes in a half shell are back on the big screen.  Is this a good thing?

There have been a lot of things to make people worried that these nostalgic mutated ninjas would be “ruined,” by this film.  From the fact that Michael Bay is attached as producer, to the rumors of changing the mythos in extreme ways, to the fact that with more creepy human looking faces, the character design of the four turtles is just a bit off.  Turns out none of those is really a big problem.  The thing people forgot to be worried about is the story.

Yes the film style is that slick yet uninspired look we’re used to with Bay’s other action films, like Transformers though decidedly less chaotic, but we can deal with that.  Yes the turtles (motion captured and voiced by Pete Ploszek/Johnny Knoxville, Alan Ritchson, Noel Fisher, and Jeremy Howard) look a bit strange but they always looked a bit strange after all and as someone who didn’t grow up watching them every day, it doesn’t bother me.  Yes the origin explanation of the turtles and their master, Splinter (Danny Woodburn/Tony Shaloub) is altered but I don’t think so much that it’s going to really cause much anguish except among the most dedicated of fans.

The rest of the cast, including Megan Fox as April O’Neil, Will Arnett as Vernon, Whoopi Goldberg as a television news producer, William Fichtner as Eric Sacks, and Tohoru Masumune as the infamous Shredder range from serviceable (most of them) to pretty entertaining (Arnett).  Nothing inspiring here, but nothing worth getting in a fight over either.

When the movie is focused on being Ninja Turtley, it works pretty well.  There are some in-jokes thrown around, referencing both the classic stories as well as directly addressing fans’ concerns about the film itself.  The sewer looks great and the turtles more or less act like they’re supposed to.  As soon as anything related to the “plot” gets underway though is when the issues ooze out of the shadows.

The many, many plot holes aside there is simply nothing here that we haven’t seen already.  In fact, we’ve seen what amounts to this exact same film only two years ago.  For all intents and purposes this is a rehashed version of The Amazing Spiderman only starring April O’Neil and her turtles.  Yes, April is actually the main character here, with the title characters more or less playing second string most of the time.  It’s an odd choice, but one studios continue to make as they seem to think that humans need to anchor a movie for anyone to care about it.

The story is so wholly unoriginal that what few parts are not directly lifted from Spiderman with a few tweaks, are cliches found in any number of other mindless action movies.  Shredder?  More like the return of the Silver Samuri with too many swords and some Transformers tech added in.  Absolutely nothing here is original in any sort of way.  It’s still fun at times and will elicit a few laughs.  It’s serviceable enough as an afternoon diversion, but this is nothing to get excited about.  You might as well go home after the opening credit sequence as that is the most exciting and innovate part of the film.  It looks particularly great in 3D and had me wishing the entire film was done in that style.  Maybe it would have been enough to distract me from the rest of this bland movie.  Maybe.

“It has the essence of the original Turtles but is lacking in other parts.”