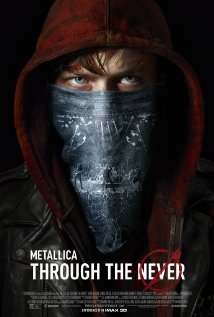 Metallica Through the Never is the second time the band has been on the big screen, the first being the documentary, Some Kind of Monster.  In Through the Never we are introduced to a roadie/errand boy named Trip (Dane DeHann) who is sent off to retrieve some needed item from a delivery van that has run out of gas.  Meanwhile, we, the audience, are treated to what Trip was really interested in – a full blown Metallica concert.

As the band roars through some of their most iconic hits, Trip’s journey is interspersed between sets.  As the concert and night go on, his mission becomes stranger and more dangerous as the streets of the city become the stage for anarchy and chaos in a trippy, apocalyptic setting.  He’s soon fighting for his life in order to bring back this mysterious bag that the band needs so much.

There is very little plot here – the side story with Trip is vague and contains very little dialogue.  It’s more conceptual than anything.  Though it’s never explicitly stated, we’re left to assume that most of what we see never really happens.  It may be part of a drug trip, hallucinations brought on by a head injury, or something taking place entirely in the mind of DeHann as his subconscious fights for life after a car wreck.  It’s not really important, and really only takes up maybe five to ten percent of the total movie.

The majority of the film is Metallica, with an in your face performance – partially due to the 3D and partially just because they’re Metallica.  Performing for a full stadium, as well as us, the band gives an outrageous performance with elaborate set pieces that help blend their concert with the apocalyptic music video we’re getting glimpses of every now and then.  If there was any ever doubt as to why Metallica is revered as one of the greatest rock bands of all time, this film should serve as a reminder.  The amount of energy the band exudes is incredible.  All the members are obviously having a great time.  Hetfield, especially, looks like a kid in a candy shop, tearing up the stage and playing to the audience.  It’s impossible not to get pumped watching this movie.

The cinematography, music (obviously), and choreography are all excellent and all blend together seamlessly.  For what it is – a feature length music video of a rock concert – it is nearly perfect.  Of course, if you don’t like Metallica, it will be an hour and a half of torture probably.  There isn’t much there for someone who doesn’t enjoy the music.  You don’t have to be a hardcore fan, though – the playlist is comprised pretty much entirely of their best known stuff, so even the most casual fan will have something to rock out to.  One other warning to point out – this movie is LOUD.  That should go without saying, but especially when piped through an IMAX sound system, this movie is as loud, if not louder, than being at a rock show in person, so you might want to take that into consideration.  Of the 93 minutes runtime, it’s not exaggerating much to say that only three of those are not blaring rock music.  It’s a great time, though I would have liked to have seen a bit more of DeHaan and his quest.

“This is not a movie, it’s a Fathom Events Metallica concert.  But it really worked for me.  5 out of 5.”

My Rating:  Four out of Five Hats

One thought on “Review – Metallica Through the Never”