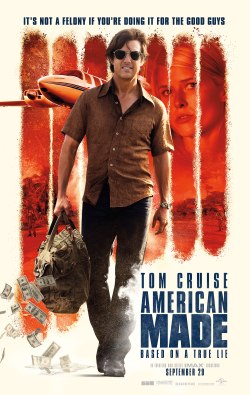 A former commercial pilot turns his fortunes around when he begins working for both the CIA and the cartel, smuggling guns, information, people, and drugs. Eventually, this sort of scheme has to catch up with you though, right?

It seems like every year we get one or two of these “stranger than fiction true accounts,” of people whose exploits and stories go beyond belief with just how crazy they seem. They’re often narrated by the person in question, feature witty dialogue and onscreen text, and involve a lot of money. Last year’s mostly forgotten War Dogs comes to mind, and the two films actually have a lot in common.

The two films share protagonists played by well known stars who zig zag across the line between “good guys” and “bad guys.” They both involve shady maneuvers transporting weapons for the government. And they each showcase a roller coaster of opulence.

It’s hard to be exactly sure of how much of this story has been aggrandized and sensationalized for the sake of entertainment, especially considering the top secret nature of the subject. The standard Wikipedia skim wasn’t even necessary to jump to the conclusion that the answer is a lot. A lot of this story has had given the artistic license treatment – that I am quite sure of. But then again, a lot of it is undoubtedly rooted in truth, albeit a condensed and entertaining version of it, and that is quite astounding.

Tom Cruise is his normal cocksure self, though a Louisiana drawl and extra floppy hair add a little bit of roughness to his usually smooth character. He’s compelling as always. As Barry Seal, he manages to make you root for a man responsible for bringing drugs into the US, conning the government, and putting a dangerous cartel into power. Then again, it’s not like the CIA are keeping their hands clean either. Speaking of the CIA, kudos to Domhnall Gleeson for his American accent.

It’s an interesting story that’s entertaining enough, but ultimately feels like it is trying way too hard to be this year’s American Hustle. It’s closer to Pain and Gain, but without the pizzazz. Cruise shoulders the whole thing himself, with Gleeson really being the only other semi-memorable supporting character. Even if you didn’t do research beforehand, there are really only a couple of ways this story could end, and there’s not enough real substance in the middle to necessarily justify getting there. I did enjoy the unbelievable story it presented, and it provided a decent diversion, but was it anything above “pretty good?” I don’t think so.

I’ve grown a bit weary of this whole “turn an obscure and wild piece of history into a comic book movie” trend that American Made reflects. Doesn’t history deserve a bit better? Besides Breaking Bad has already done the whole drug/money laundering thing so much better.

“Not quite what the trailers make it out to be. Speaking of trailers, they do manage to ruin the suspense a few times. Better off waiting for it to be on TV.”

American Made smuggles into 3,024 theaters, September 29

One thought on “Review – American Made”