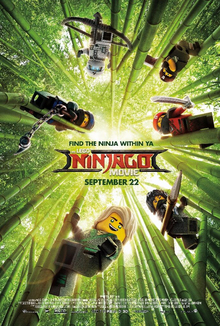 After the somewhat surprising success of The LEGO Movie, and the enjoyable The LEGO Batman Movie, Warner Bros. is back with Ninjago. What?

For the unfamiliar, Ninjago seems like an odd choice to adapt into a film. However, the ninja themed playset already has had great success spinning off as a TV series, novels, video games, comic books, and more. You may not know the secrets of spinjitsu, but your kids probably do. Luckily, this movie is not only for the kids.

While decidedly more kid oriented than the previous two films, Ninjago has no shortage of in jokes, blink and you’ll miss them easter eggs, cultural references, and a full-hearted story about family that adults and the young at heart will gleefully soak up. With an often improvised script and a talented voice cast led by Dave Franco as young Lloyd, its fast, funny, and has some good messages to boot.

Lloyd is like any other kid in the city of Ninjago – other than the fact that it’s well known he’s the son of the evil super villain Lord Garmadon (Justin Theroux) who tries to take over the city so often that Robin Roberts and Michael Strahan spend most of their on-air time predicting and covering his attacks. Yep. Lloyd has another secret though – he’s a member of a secret ninja squad who defends Ninjago daily against those attacks. Talk about family drama. And we haven’t even gotten to the big reveal yet.

This film exists in the same spirit as the first LEGO movie, incorporating a number of real life objects and aspects into the story – such as a monstrous and terrifying cat. Anyone who has had a cat and played with LEGO bricks will understand. This movie seems to exist a bit more in the real world than the other films, with not everything necessarily being made of LEGO – such as most of the jungle. It fits though, as it is framed as an adventure story being told by a mysterious Asian shop owner (Jackie Chan) in the real world. I’m sure it allowed a bit more creative relaxation, too, not having to figure out how to make every single thing appear to be made of plastic blocks.

The attention to detail in this film is top notch, and the story, while familiar, is solid. It’s a tale of inner strength, friendship, family, forgiveness, and martial arts movie riffs. Kid friendly and easily enjoyed by adults, it’s another great LEGO movie that keeps the quality of the franchise going. I can’t wait for the next one.

“It was enjoyable, but I felt like I was missing something because I don’t know the Ninjago backstory.”