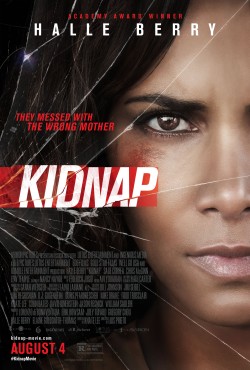 It’s every parent’s worst nightmare – a child taken. In this case, though, the kidnappers have “messed with the wrong mother.”

Since 2013 Halle Berry has headlined exactly two films. The Call, in which she plays a 911 operator who takes matters into her own hands when it comes to rescuing a young girl who has been kidnapped, and this movie. In Kidnap she plays a mother who takes things into her own hands when her young son is kidnapped. I’m not sure what to make of that fact, but there it is.

After some blatant “momipulation” at the start of the film in the form of a slideshow highlighting just how precious children are, we jump into the story. It doesn’t take long for the stakes to be set – as single mother Karla (Berry) takes a frustrating call dealing with her ex wanting custody, Frankie is snatched from right under her nose at the fairgrounds where they were having a special afternoon together. And we’re off.

Now I have never considered kidnapping a child, but if I did, I’m fairly certain that if that child’s mother saw me and rushed my car, pounding on the windows and holding on as I tried to drive off, I’d cut my losses and push the kid back out and drive away. I’d want to get out of there before things got out of hand and led to an all day car chase with multiple casualties and all sorts of craziness. Apparently that’s just me and my inexperience in kidnapping children though.

Even with its basic, primal, premise, Kidnap is just too ridiculous for life. Karla is hysterical at all the wrong times, and despite carnage and huge scenes, nobody else seems to really notice or get involved. Sure the cops are mentioned and even sort of show up a couple of times, but never to any real conclusion. It’s imperative to the movie that Karla goes this alone to the bitter end, no matter how illogical that might be.

I’d be OK with the lapses of logic and the over the top car chases and how the situation gets more and more unlikely and ridiculousness if I felt anything. Anything at all. Even with my paternal instincts I rarely found myself even concerned a little bit. Maybe I was too distracted by Berry’s constant muttering to herself and narration of thoughts and events. Maybe I was too bemused by how often we saw Karla’s speedometer dramatically hit 60 mph. Maybe it was too obvious that there would be a happy ending one way or another. Maybe I just couldn’t take any of it seriously.

I’ve seen far worse, and it’s an OK way to kill an hour an a half if you’ve got thing else to do, but it’s not good. It’s a curious parental thriller that fails to be thrilling or emotional most of the time – in fact, much of the movie elicited laughter from my particular audience. Perhaps they were just amused at how audacious the whole thing continued to be as it mistook going off the deep end for upping the ante.

You can safely skip this mediocre summer flick.