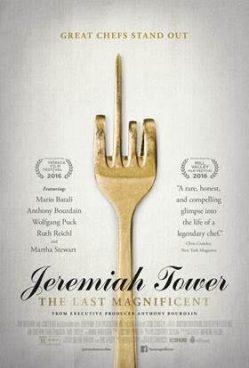 Unless you’re deep into the culinary world, you’ve probably never heard the name Jeremiah Tower. The father of modern American cuisine and probably the first of the country’s celebrity chefs, he changed the face of the food industry. He is also a rather strange man.

Part documentary, part biopic, The Last Magnificent takes you from Jeremiah’s early childhood where luxurious foods were his only real companions, to his later years as a soul searching recluse, and the bustling celebrity in between. Never formally trained as a chef, everything in his life seemed to steer him in the direction of creating amazing things with food – and he tried to create an amazing life by doing so.

Told with a mixture of archive footage, reenactments, and famous talking heads, this biographical documentary has more in common with the the versions of the genre that you hated being forced to watch in school than that slick Oscar nominee you pretend to have seen. Exceedingly over dramatic and pretentious, it doesn’t serve much purpose. Sort of like fine food. Don’t get me wrong – good food can be exciting and important in its own right, but in the end it is still just something you eat. Food and the life around creating extravagant dishes is more like a theology of art to Jeremiah than anything else, and this film follows suite.

Jumping around chronologically, interspersed with zen like images and quotes, and featuring people who think of its subject as a culinary god, The Last Magnificent is completely full of itself, yet empty. Again, a pretty accurate reflection of the subject. Rather than giving me reason to find Jeremiah’s story and person to be worthwhile and fascinating, as should probably be the purpose of this film here, I’m simply encouraged to reinforce the stereotype that the only real artistic geniuses in the world are sad people with something wrong with them, and who have lived rather messed up lives.

I did end up finding bits of the information presented here interesting, but I could have probably learned most of them by reading up on the subject via a Wikipedia article. Everything else is just aggrandization that I didn’t care for, and repetitive footage of running on a beach in slow motion. It’s a portrait of a man whose life ends up seeming like nothing more than a sad curiosity, despite (and because of) his achievements. I’m not sure what the purpose of this film was intended to be, but I don’t think it achieved it.

Mrs. Hamster found this film to be too boring to finish watching