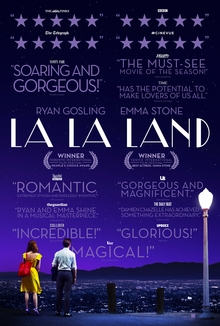 Rogue One may be the *big deal* movie this weekend, but make sure you don’t forget about La La Land! We (Washington Area Film Critics Association) did award it best film of the year after all!

After debuting their chemistry in the fantastically charming Crazy Stupid Love, and squandering it in the disappointing Gangster Squad, Ryan Gosling and Emma Stone are back together again. This time in a jazz musical that hearkens to another era by Whiplash director Damien Chazelle. Stone plays the quintessential Hollywood cliche – a waitress in LA trying to get her big break into acting. Gosling is a jazz pianist far too good for the gigs he’s got. A chance meeting propels them down a whirling road of music and romance.

A timeless score that would feel just as at home on the stage as the big screen sets the tempo. It’s a true musical with expository tunes, unlikely and impromptu dances, and set pieces that feel like actual sets, even if they’re being filmed on location. Taking full advantage of its stars’ musical talents, La La Land embraces everything it is, without becoming a cliche or parody of itself. It’s a musical from a bygone era for the current one. Full of hope and joy, as well as predictable melancholy, it hits familiar beats of many a similar show. It’s a story of dreamers, pursuing impossible dreams together. But it’s not the same story you may think it is.

The beginning of the film grabs your attention – an elaborate song and dance number on a Los Angeles freeway is exhilarating, smile inducing, and a treat for any musical fan. The story, the middle of the film, wraps its fingers around you like Gosling’s on the ivories, expertly creating an emotional and enjoyable experience. You’ll be pulled along with these two dreamers as they navigate life together. It’s what makes this such a good movie. The ending though, that’s what takes such a good movie and sets it apart, giving it new meaning, and will stick with you. It celebrates the dreamers, the dreams, and the unique place that is Hollywood. But at the same time, it is a meloncholy look at the reality. Not quite a subversion of the cliches of the genre, not quite a celebration either. Everything works together to become just a fantastic story that should leave you just a bit emotional by the time all is said and done.

“I love this movie, but I hate the ending.”

My rating: Five out of five hats