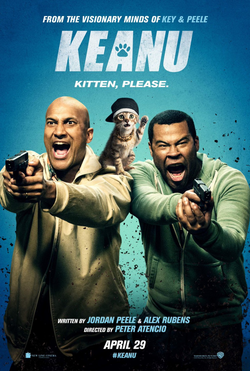 It’s a scenario that only makes sense in movieland, or perhaps somewhere on Reddit.  Two unassuming cousins – portrayed by dynamic comedy duo Key and Peele in their first big screen adventure – find themselves in the middle of a gang’s turf war, all because of a little kitten named Keanu.

When pothead Rell (Peele) has his life shattered by his ex, his suburban superdad cousin Clarence (Key) is ready to be there for him.  An adorable little kitten gets there first, however.  With Keanu in his life, Rell has purpose again and begins to flourish.  When someone breaks in and catnaps Keanu, however, it’s up to our two unlikely heroes to find him and bring him back, no matter what.  And there is a whole lotta what.

Part absurd sketch, part caper flick, and maybe a dash of dark comedy, Keanu is 100% off the proverbial chain.  Despite the name and setup, it’s supposedly not inspired by Keanu Reeves recent masterpiece, John Wick but it certainly could have been, and pays humorous respect to the most excellent actor many a time.  Reeves, in fact, shows up in a Stan Lee caliber cameo at one point.

Now, I usually mention in my reviews of comedies that I don’t tend to find the same things funny that most other people do, and vicey versey.  This time, however, the rest of the audience and I seemed to be on the same page, so you can keep that in mind.

From the very beginning, with a scene that could have come from The Boondock Saints except with a kitten involved, this movie and its stars are on their A-game.  Feeling culturally aware, yet original in its own right, Keanu keeps the laughs coming without coming off as cheap.  It’s R-rated comedy that doesn’t rely on the red-band content to prompt laughter just because somebody said a dirty word.  It uses the freedom of the rating to allow the talented cast to say and do whatever serves the story best in the name of comedy.  In a world where comedy seems to consist mainly of references to other movies and pop culture, or trying to offend as many people at once as possible, it’s incredibly refreshing to find something funny because it, itself, is just plain funny.

In addition to Reeves, Anna Faris makes an appearance in a cameo that I would rate right up there with Bill Murray in Zombieland as one of my all time favorites.  It’s hilarious and ends in such an unexpected way, you just have to see it.

The whole movie had me laughing from start to finish as it jogs along at a brisk pace.  It’s exactly as long as it should be – just over an hour and a half – and never feels frantic, and doesn’t drag either.  Unlike some movies, it doesn’t kill a joke by beating it for seven and a half times too long until it becomes so annoying that you forget it was originally funny.  The comedy is even throughout.

There’s not much of any sort of message here – no moral to the story except maybe “stick up for yourself,” and not much in the way of biting social commentary (at least that I caught onto).  It’s just an exceedingly unlikely story that plays out purrfectly for laughs as you escape into a world you can only expect to find in a movie.

I waffled on the rating for this one – on one hand it is quite hilarious, but on the other, it doesn’t have much more than laughs to offer – not a bad thing, but it doesn’t quite reach the level of great, just really good.

“I went in expecting it to be funny but it ended up being *VERY* funny!”

My rating:  Three out of five hats

One thought on “Review – Keanu”