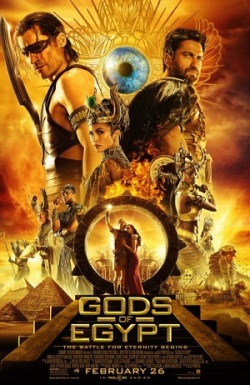 Gerard Butler does what he does – star in a period action flick based on ancient mythology.  This time the setting is Egypt of long ago, and he’s the villain.

Let me set the stage for you real quick.  Egypt is paradise – it is the starting point of where the gods created life on Earth, and so they choose to reside there, ruling benevolently.  Horus, god of the air, (Danish Aaron Eckhart, Nikolaj Coster-Waldau) is about to inherit the throne from his aging father.  Yes, gods apparently get old and retire.  In a “who could have seen this coming,” move, his brother (overly tan Butler) who has been stuck ruling the brutal deserts of the country, shows up and takes the crown instead.  A time of tyranny descends upon the land.  Only our faithful narrator, a mere mortal street rat named Bek (Brenton Thwaites) will be able to save the day.

Every single review of this film is going to bring up whitewashing, so let’s get this out of the way quick.  Yes, most of the cast is white despite being in Africa.  The gods are from some other plane of existence and just happened to like Egypt the best to settle in.  That’s why the skin of most of them, like their enormous height and golden blood don’t fit in.  Sure.  A poor excuse, but at least it has a tinge of logic to it.  Our mortal hero though is played by a young man set to play Orlando Bloom‘s son in the next Pirates film – you don’t get any whiter than that.  OK, so this is another #HollywoodSoWhite problem film.  That’s the very very least of its problems.

The marketing of this film makes it look like a young girl’s Lisa Frank sticker collection threw up all over her thirteen year old’s wild imagination version of Egypt.  The movie itself isn’t quite so sparkly, but it definitely borrows more from Jupiter Ascending than The Ten Commandments.  Except Gods of Egypt wishes it were half as well thought out as Jupiter.  At times, it makes that Wachowski train wreck look like Shakespeare.  With cheap and bombastic CGI, it plows through a plot as thick as something very thin.  The laughably awful dialogue ranges from being completely weak and cliche, to completely out of place and anachronistic.  Some of lines are so out of place that I have to wonder if this was originally intended to be a tongue in cheek send up of epic genre films, but when the direction of the film changed, not all of the comedic elements were removed.  How else do you explain the Sphinx having a British accent and proclaiming a Pooh-esque “Oh bother,” when he is defeated?  I also swear that during a deadly battle scene between two ancient Egyptian gods, a terrified woman in the crowd crossed herself.  Let that sink in.  I’d have to watch the scene again to be sure, but that’s not happening.

The casting is all over the place and further supports my theory that this was a brilliant comedy gone very very bad.  Why else would Geoffrey Rush be sun god Ra?  And don’t get me started on the brilliant Chadwick Boseman as Thoth, the god of wisdom.  The supposed wisest god of them all is portrayed as something like an annoying caricature of Encyclopedia Brown with the undertone of a stereotypical gay man in love with himself.  It’s just strange and unnerving.

I won’t address the plot holes since they are so many that I wonder if the script was written on chicken wire.

In addition to reminding me in ways of Jupiter Ascending, it also struck me as something written by someone trying to emulate a classic adventure video game, a la The Legend of Zelda.  As our heroes go on side quests to various temples with needlessly complex puzzles, meet people who assist in exposition and nothing else, and acquire various objects that will help them on their way, it has the distinct flavor of a video game, but not in a good way.

I was tempted to give this movie a slightly better score since I didn’t actually *hate* it per se, but it turns out there is practically nothing of redeeming quality here to reward.  When I’m yawning during the climax of a 3D epic action adventure, there’s a problem.  When I can’t even find enjoyment in the over the top battles and crazy imagery, other than in a sadly ironic manner, there’s a problem.  This movie, this movie is the problem.

My rating: One out of five hats

Gods of Egypt sets itself up for a Razzie nomination in 3,000 theaters, including IMAX 3D, February 26

2 thoughts on “Review – Gods of Egypt”