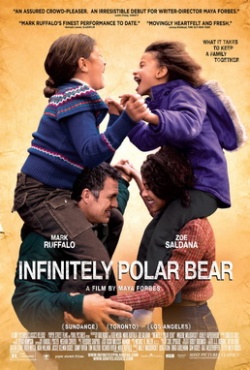 The directorial debut of writer/producer, Maya Forbes, Infinitely Polar Bear is a semi-autobiographical ode to her father, her mother, and rewardingly difficult life growing up.

Cam Stuart (Mark Ruffalo) is a manic depressive man with boundless imagination and a love of life even if sometimes everything about it drives him mad.  Maggie Stuart (Zoe Saldana) is an intelligent, caring woman with a drive to provide the best life possible for her family.  Together they have two feisty girls and one complicated life.

When Maggie decides the best thing she can do to provide for the girls is to further her education in New York, she makes the difficult decision to leave the girls in Cam’s charge – and vice versa.  Fresh from an extended stint of therapy and rehab, Cam is doing better, but nobody is sure he’s ready to have the responsibility of being a dad again – least of all him.

As can be expected being that this is an emotionally driven comedy and not a wrenching drama, the good usually outweighs the bad.  Yes the family’s life is unorthodox to say the least, and sometimes downright depressingly despondent, but it’s played off as quirky and emotional.  Things are not all happy go-lucky, but there’s certainly a romanticized sheen over memories of a difficult life here.  It’s not goofy, and doesn’t ignore the trials of dealing with a biploar parent, but it presents the story in a way that is easy to empathize with while leaving you with a bittersweet smile despite everything.

Saldana is fine in this role, but it’s really the Mark Ruffalo show, along with the two amazingly talented young girls (one of which is Forbes’ own daughter) who play his daughters.  Together they posses a chemistry that prevents this from falling into sappy made for TV drama territory.  Ruffalo showcases his acting chops, sliding almost frighteningly easily along the emotional scale, from one end to the other.  He transforms from a loving and caring man who doesn’t understand the meaning of “trying too hard,” to an angry monster at the drop of a pin.  I wouldn’t be surprised if he drew from his experience in this film when portraying Bruce Banner in Age of Ultron.

It’s Ruffalo’s performance that anchors this piece of film and prevents it from being a cheesy mess.  Ultimately it is perhaps more meaningful to Forbes than it could ever be for the general audience, but it’s a sweet and emotional story all the more impactful knowing there’s a true story behind it.