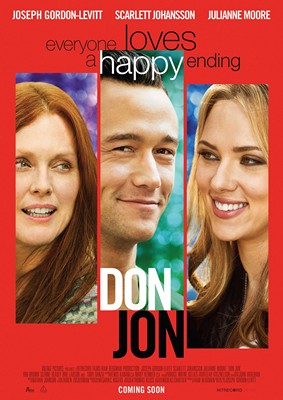 In an actual relationship for once, Jon is convinced that this could be it – but that doesn’t change the fact that for him, porn is still more interesting than the real thing.  When Barbara catches him in the act, though, she’s much more upset than interested.  Despite the fact that she allows a different type of unrealistic media to control her perceptions of what a relationship should be, she can’t tolerate his habit.  It looks like Jon’s foray into relationship world is a bust.  It isn’t until he meets an unlikely friend (Julianne Moore) that he realizes some of the pieces of the puzzle that he’s missing.

This is a very valiant freshman effort from Gordon-Levitt, but it’s obvious that he’s new at this.  There are a lot of solid ideas floating around this film, but few ever settle down to Earth.  Tackling the issue of porn addiction from a comedic yet serious point of view is a challenging task, and despite its best efforts, Don Jon doesn’t quite complete the take down.  It has a lot it’s trying to say, but in the process it ends up finishing very few of those thoughts.  It’s not quite as clever as it thinks it is, nor as shocking/cutting edge given the topic.  That’s not to say it isn’t clever, or doesn’t have it’s brutally honest and even shocking moments, but as a whole, the movie comes off tamer than what I was expecting.

“My body, my pad, my ride, my family, my church, my boys, my girls, and my porn.”  Those are thing things listed as the few things that Jon cares about.  It seems like the film could have focused a bit more on fewer of those items to really dig deep into this interesting guy’s psyche, but we jump around from one to another.  Yes, they’re all connected, and yes there are interesting things to be said about each.  You can tell that there are a lot of grand ideas about all of these things that are begging to come to the surface, but they just can’t break through and get a solid turn at the podium before the credits roll.

With duties of writing, directing, and acting all on his shoulders, Gordon-Levitt carries the wait more than sufficiently, which in and of itself is impressive.  He has a confident voice and a story to tell with it.  Johansson is obviously having a lot of fun with the role, and Danza is perfectly cast.

This is essentially a rom-com with a twist.  It should appeal to both men and women though, and if internet statistics are anything to go by, most people will probably be able to relate to it to some degree or another.  It’s a film with a smart mind behind it and a good heart, and I eagerly look forward to a more refined sophomore effort from Mr. Gordon-Levitt.

“Joseph Gordon-Levitt is a 9, and so is this movie.”

My Rating: Three out of Five Hats