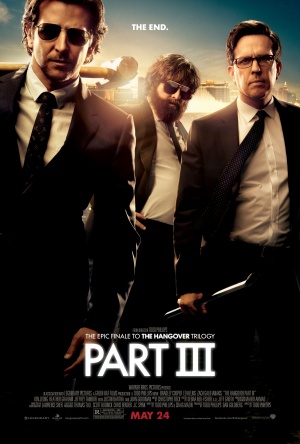 The wolf pack is back yet again.  *sigh*  Phil (Bradley Cooper), Stu (Ed Helms), Alan (Zack Galifianakis), and Doug (Jusin Bartha) are older, but hardly wiser in this final episode of a franchise never intended to be a trilogy

Things have calmed down for Phil, Stu, and Doug.  The only loose thread is Alan, who is off his meds and off the wall.  Determined to get him help, the pack of friends set out to drive him to a promising sounding rehab facility.  What can go wrong?  A lot when Leslie Chow (Ken Jeong) escapes from Thai prison.  It throws the guys’ lives into chaos despite their best intentions.  At the mercy of powerful drug lord Marshall (John Goodman who pops up everywhere these days), it’s up to our bumbling heroes to track down the crazy Asian, recover some stolen money, and save their own skins.  All in a day’s work.

Full disclosure – I hated The Hangover and never even saw The Hangover Part II.  They’re just not my kind of movie.  So I didn’t have high expectations going into this one.  I was surprised, but not by much.

To director Todd Phillips‘ credit, he takes a big risk here, abandoning the formula that made the first Hangover film a huge hit and the second feel like a lesser rehash (from what I’m told).  From the very first scene, you get the sense that this movie is going for a bit more…plot?  There’s a bit more seriousness here – as far as a movie like this can be serious – as seemingly random bits from the previous two films come together in a convoluted grand scheme.

What continues to astound me is how the character of the annoying man-child (Galifianakis here) continues to be a steady staple of American comedy.  The combination of being annoyingly ignorant, irresponsible, rude, and mentally unstable just doesn’t equal funny to me.  Am I missing something here?  I want to strangle the guy, not laugh at how he’s making other people’s lives miserable and decapitating innocent animals.  The thing is, Galifianakis is a good actor.  I’ve seen evidence of that – particularly in the vastly underrated It’s Kind of a Funny Story.  He’s doing what people like, I just don’t get why people like it.

Surprisingly, other than the opening gag and a shocking post credits stinger, The Hangover III is relatively light on the offensive content.  Sure it’s all crude, R-rated stuff throughout, but it doesn’t seem to cross the line like the first one did (as did the second, judging from the synopsis and trailers).  For some, that will probably mean this is not that funny of a movie.  For me, it just meant that instead being disgusting and cringe-worthy, it was just mostly dumb with some decently funny scenes sprinkled here and there.

Hangover III seems almost as interested in being a heist-esque movie as a comedy which would be fine if only it were funny or exciting.  There are a couple of twists that wrenched a laugh from me or drew gasps from the audience.  Again, this is not my type of film to start with, but in trying to create something different, I don’t think it’s the type of film Hangover fans are looking for either.  In the end this is a mostly forgettable end to a franchise that should have ended after the first film, even if the ending suggests the possibility of a fourth.

Mrs. Hamster decided free was too much to pay for this movie so did not attend this screening.

My Rating:  Two out of Five Hats

The Hangover Part III stumbles into 3,450 theaters, May 23