There’s only one wide release this weekend, for good reason.  Already breaking records over seas, a studio would have to be pretty brave to try for counter programming against what may be the biggest film of the summer blockbuster season. 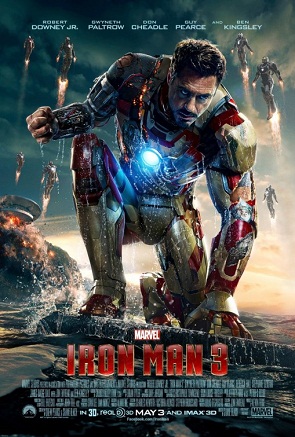 Predestined to be one of the biggest films of the summer, Iron Man 3 is not just another Iron Man movie – it’s the first sequel to the ridiculously successful Avengers.

The Avengers incident has left Tony Stark (Robert Downey Jr.) more than a little shaky.  Prone to panic attacks and insomnia, he occupies himself by incessantly tinkering and obsessing over Pepper Potts (Gwyneth Paltrow).  When Happy (Jon Favreau) is nearly killed in an apparent terrorist attack, the fight against The Mandarin (Sir Ben Kingsley) becomes personal.  Don Cheadle reprises his role as War Machine (now The Iron Patriot) and Guy Pearce is Aldrich Killian, a scientist with a chip on his shoulder.  Ty Simpkins and Rebecca Hall also co-star.

Some early reviews have gone so far as to say that this is the best super hero movie you have ever seen and that it even blows The Avengers away.  I don’t know if I would go that far.  It is miles better than Iron Man 2, that is for sure.  I might even say it is better than the first one.  It is a fantastic action-packed superhero movie.  It doesn’t quite have the magic of The Avengers, but is nonetheless a promising start to Marvel’s Phase Two.