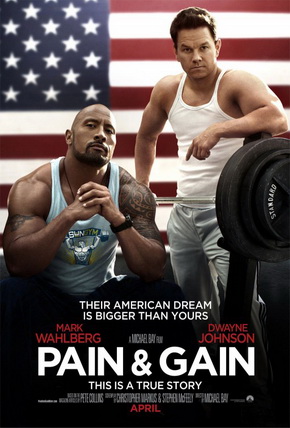 Michael Bay takes a break from giant robots and even bigger explosions with a much lower budget and smaller scale film than he’s directed lately. Based on the real life exploits of the “Sun Gym Gang,” Pain and Gain is the story of a group of criminal bodybuilders, portrayed here by Dwayne Johnson, Mark Wahlberg, and Anthony Mackie.

Inspired by motivational speaker Johnny Wu (Ken Jeong), Daniel Lugo (Wahlberg) decides it’s high time he and his good friend Adrian Doorbal (Mackie) have the money to go with their bodies. Recruiting Paul Doyle (Johnson), a fresh out of prison coke addict turned born again Christian and bodybuilder, the three of them put a plan into motion to get themselves rich. What starts as a simple kidnapping extortion scheme turns ugly, though, as their target (Tony Shaloub) proves to be a difficulty and liability. Rebel Wilson, Ed Harris,and Rob Corddry costar.

Did I mention that this is a comedy? A very dark and disturbed comedy. It seems an odd choice to portray such a disturbing real life tale in this way. Death, torture, dismemberment – all are present here, but we’re supposed to be laughing. It’s almost like if someone made a comedy about the Holocaust (though that has actually already been done, surprisingly well).

I find myself rather conflicted over this film. On one hand, it is entertaining, and the entire cast is fantastic. Wahlberg plays the ambitious but somewhat mentally stunted character perfectly, The Rock is actually quite funny, and Rebel Wilson is Rebel Wilson. Tony Shaloub proves once again that he is a versatile and skilled actor. It’s not an action film, but the action keeps moving and the characters really drive it.

On the other hand, this is a true story. You can’t even say it was “inspired by true events,” as the film makes sure to pound home the fact that what you are seeing is, in fact, real life (albeit massaged by Hollywood’s finest, surely). Most of the time I found myself enjoying the film, but at the same time wondering if I really should be. When the three bulking amigos show their ineptitude at killing someone, it is quite funny – but we’re laughing at a situation where someone is continually being almost killed. It’s even worst than it sounds.

Humor can be a great tool in story telling, even in unexpected ways. By laughing at the incompetence of the bad guys, we’re belittling them and their choice in activity. But at the same time, they’re a little too funny, making us like them, and laugh at the good guys too (who are portrayed as maybe not being that great). If this was just fiction, it would be a different story – still very dark and disturbing, but open to interpretation and free from the moral implications of being about real people.

There are times when the movie works, but other times where it descends into demeaning, comical territory that doesn’t give the weight needed to certain characters or situations. There are a number of parts that are sure to offend Jews and Christians alike, as well as other parts that will just offend those with good taste or weak stomachs.

The camera work, in particular the use of slow motion works quite well and there are some really nice shots throughout the movie, zooming through the walls of buildings. Over all, the production value on this movie is quite high.

A lot of people are going to see this movie because of the trailers. Some of them are going to like it. A lot of them, I think, are going to end up hating it. Most will probably be surprised by it.

Mrs. Hamster did not attend this screening

My Rating: Three out of Five Hats, with one knocked off for bad taste

2 thoughts on “Review – Pain and Gain”