February opens with two wide releases this weekend.  One is an actioner echoing The Last Stand from earlier this month and the other is something you have undoubtedly never seen before – a zom-rom-com.

Bullet to the Head 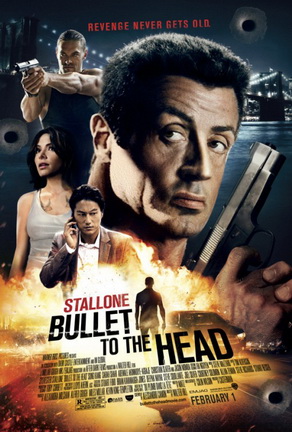 Trailer:
Sylvester Stallone sees Ahnold’s Last Stand and raises him a Bullet to the Head.  A hitman (Stallone) and a cop (Sung Kang) team up to take down the bad guys who left them each without a partner.  Aw, isn’t that cute.  In what looks like mostly an excuse to have Sly blow a few more brains out before he retires (didn’t he say he was going to do that a few years ago already?), this could easily be The Expendables, but without all the other actors and great sense of self comedy.

Now this one intrigues me.  It pretty much breaks most of the rules of a zombie film, but in a genre that has become a bit over-saturated, that’s ok.  When a zombie named “R” (Nicholas Hoult) sees Julie (Theresa Palmer), it’s love, or something like that, at first sight.  That jolt to the metaphorical heart seems to get the physical one going too, and R slowly begins to regain his humanity in this romantic zombie comedy.  Rob Corddry, Dave Franco and John Malkovich add their comedic talents to the cast.

This film (based on a book by the way) has been getting some great word of mouth, and the press seems to like it as well.  As of this writing, it holds a 100% on Rotten Tomatoes, although there are only six critics reviews in so far.  I’m not usually one for “supernatural romance,” but this looks closer to Zombieland than Twilight, and I’ll be giving it a watch sometime soon, I’m sure.